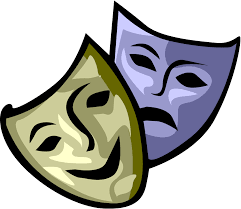 Order tickets for any of the plays listed below through the
​Tierrasanta Unit of Rady Children’s Hospital Auxiliary.
Contact Marina Dion (619) 933-0217 mdion@san.rr.com

An electrifying world premiere musical comedy inspired by the songs of one of the most beloved and iconic acts in music history, Huey Lewis and the News. Mainstays on the Chicago dive bar circuit, Bobby and his band are hustling for their big break. But after their latest rejection, Bobby decides it’s “Hip to Be Square,” trades in his guitar, and starts “Workin’ for a Livin’” in corporate America. His boss, Cassandra, has struggles of her own, having sacrificed her personal life for the company. When they both get a shot at their dreams—for Bobby, another crack at rock stardom, and for Cassandra, a chance to become CEO—they must decide “If This Is It” for their careers, or if “The Power of Love” triumphs over all. The Heart of Rock & Roll celebrates the classic songs of Huey Lewis and the News in this heartwarming and hilarious new musical.

BEAUTIFUL
Sunday, October 7, 2018
At 6:30 p.m.
At the Civic Theatre
​
BEAUTIFUL – The Carole King Musical tells the Tony® and Grammy®Award-winning inspiring true story of King’s remarkable rise to stardom, from being part of a hit songwriting team with her husband Gerry Goffin, to her relationship with fellow writers and best friends Cynthia Weil and Barry Mann, to becoming one of the most successful solo acts in popular music history. Along the way, she made more than beautiful music, she wrote the soundtrack to a generation.
Warning:  Special effects including e-cigarettes and haze used in this performance.

This Tony-winning musical is based on the Gregory Maguire novel, "Wicked: The Life and Times of The Wicked Witch of the West." It takes place in the Land of Oz and tells the story of many of the characters before Dorothy arrived, including "Good Witch of the North" Glinda and "Wicked Witch of the West" Elphaba. "Wicked" features a book by Winnie Holzman with music and lyrics by Stephen Schwartz.

Inspired by Adrienne Shelly’s beloved film, WAITRESS tells the story of Jenna – a waitress and expert pie maker, Jenna dreams of a way out of her small town and loveless marriage. A baking contest in a nearby county and the town’s new doctor may offer her a chance at a fresh start, while her fellow waitresses offer their own recipes for happiness. But Jenna must summon the strength and courage to rebuild her own life.
“WAITRESS is a little slice of heaven!” says Entertainment Weekly and “a monumental contribution to Broadway!” according to Marie Claire. Don’t miss this uplifting musical celebrating friendship, motherhood, and the magic of a well-made pie.

HELLO, DOLLY!
Sunday, January 20, 2019
At 6:30 p.m.
At the Civic TheatreWith four 2017 Tony Awards under its belt, including Best Revival and Best Actress for Better Midler, Jerry Herman's musical comedy is truly back where it belongs. Featuring memorable classics such as 'Before the Parade Passes By' and 'Put on Your Sunday Clothes' Hello, Dolly! is ready to reclaim the hearts of the American people.
Based on Thornton Wilder's play The Matchmaker Hello, Dolly! was an instant success when it first debuted in 1964. Winning an unprecedented 10 Tonys at that year's ceremony it was soon adapted for the big screen featuring a cast led by Barbra Streisand and a young Michael Crawford. This 2017 revival is directed by four time Tony winner Jerry Zaks (Sister Act) whose talent has brought Hello, Dolly! back into the lime light.
WHAT'S HELLO, DOLLY! ABOUT?In 1880's New York a rich and cantankerous widower by the name of Horace Vandergelder is on the lookout for a wife. To help him on his quest he engages the services of professional matchmaker Dolly Gallagher Levi, but little does he know that Dolly has his perfect match in mind from their very first meeting - herself! Now all she has to do is make Horace realise it as well...

“A DYNAMITE BROADWAY REVIVAL.”
– The New Yorker
Experience the acclaimed new production of the legendary musical Miss Saigon, from the creators of Les Misérables. This is the epic story of a young Vietnamese woman named Kim. In a bar run by a notorious character called The Engineer, Kim meets an American G.I. That encounter will change their lives forever. Featuring stunning spectacle, a sensational cast of 42, and a soaring score including Broadway hits like “Last Night of the World,” “The Movie in My Mind,” and “The Heat is On in Saigon,” this is a theatrical event you will never forget.
“THE NEW MISS SAIGON SOARS TO THE RAFTERS!”
– NY1